It was a sensational day for TeamGB’s U16s, U21s, O45s and O55s teams as the European Racketlon Championships opened with victories galore, from the crushing to the hard fought. As the dust settled, TeamGB topped the medal table with 3 Gold and 2 Silvers. There were also strong performances from Germany (2 Golds and a Bronze) and Hungary (Gold, 2 Silvers and a Bronze), but a poor day for hosts Austria with only a pair of Silvers and a Bronze to show for their home advantage. But, back to the Brits, who were exceptional all day.  All results can be found here.

What’s the Story? Morning Glory!
A brace of U16s teams in addition to the U21s, O45s and O55s meant we had 5 teams and 18 players in action across the day and our teams were in action from the very start. We began with our O45s team, who were facing the monumental task of 4 matches in the day to complete their 5 nation round robin competition. They started against the home nation, Austria, and an excellent victory leading from start to finish, built on a crushing singles for Barbara Capper, 1 down 3 to go for the O45s. In fact, it wasn’t a good morning for the Austrians vs. the Brits at all, with the U21s crushing Austria 2 by 86 points and the U16 2’s by 99 points (Will and Ross winning every single rubber in their match). However, the match of the morning pitted defending European Champions GB O55s against reigning World Champions Germany. In 2016, the Germans dominated the singles ties to claim an overall victory, but in 2017 and surrounded by British success, they won both singles and smashed the doubles to enact revenge on defeat at the same stage last year.

Making Hay As the Sun Shines
Into the afternoon and as the sun blazed down and temperatures soared, you may be forgiven for expecting the Brits to whither on the vine, instead they continued to shine. Firstly the O45s popped up with another crushing win, this time it was the Swiss whom they neutralised with effective aplomb, the O55s were not far behind them, crushing the Czech Republic and cruising into the gold medal match later that evening. The U16 1s (David and Luke) got in on this act, showing no mercy as they dismantled Austria 3, conceding just 16 points in 12 rubbers, a statement of intent from the reigning World Champions. For the U21s, it was their (expected) biggest test of the day, as they faced Finland, led by regular Men’s A player, Luka Penttinen, but the British bandwagon was not so much rolling as careering its way down a steep slope smashing all in its path. Finland were dispatched (+55 before tennis), as were the Czech O45s, as our O45s, having enjoyed a post lunch siesta (their free round without a match), sauntered back in to win +49, Barbara once again the star alongside an unlikely 11-0 tennis victory for Mark Steeden, shocking UK based Jack Bishop! There was vocal support for the GB Teams from each other and the fans watching on!

However, the drama of the afternoon belonged in the U16s category, with both the U16 1s and U16 2s facing effective semi-finals against Austria 1 and Hungary 1 respectively. All four sides had played one won one in their respective groups, it was all to play for. For the World Champions there was little to fear, David and Luke strolling to a +49 win over the Austrians, which was all over before the tennis. The tie of the day however featured the GB U16 2s, Will Gregson and Ross Wilson. Facing group favourites Hungary led by the talented youngster Botond Francia. The Hungarians started well, they took the opening three TT rubbers (2 x singles, 1 x doubles), however the young Brits are a plucky pair, losing all three of those rubbers 12-10. Every point counts in Racketlon, would these narrow results haunt one side later? The badminton was another clean sweep for the Hungarians, a brace of 11-8 wins and an 11-6 in the doubles put them 17 ahead after the first two sports, with just 66 points left on offer in the match. Hungary were in the box seat, and Botond kept it going for them, defeating Will in the first squash rubber 11-8, 7 straight sports for the Hungarians, but crucially for the young Brits, they were just 20 points down, 7 battles won for Hungary, but Britain were still in the war. They did, however, need something special, to get them ticking and Ross stepped up and delivered with an 11-0 squash victory, and followed up by an 11-8 squash doubles win, spun the momentum on its head, the GB boys were just 6 down with three tennis rubbers to play. Botand defeated Will, but only 12-10 again, the young Brit hanging in there and minimising the damage, 8 down with two rubbers to play. Ross up next, leading 6-0 at the turn, his singles opponent, Balazs Szalay, like the plucky Brits fought back, Ross won 11-6, GB trailed by 3 into the doubles rubber. The Brits started well, an early lead 2-0 remained at the halfway stage, 6-4 at the turn. On the clay, in sun, the Hungarian’s struck back 7-7, they needed 9 for the win. 8-8, match points for Hungary, the British hopes, kept alive for so long, were surely now fading. 8-8 became 10-8, still match point Hungary, but now gumi-arm point GB, who would emerge from this tussle victorious? 11-8, the boys had clawed back from the precipice, saving 3 match points, forcing a gumi-arm. FIR rules officer (Richard Middleton) and Tournament Director (Christoph Kren) confirmed the rules and away we went. In team Racketlon, the gumi-arm point is played by the final match on court, so in the U16s, this is the doubles. GB won the spin, Hungary to serve, Ross to recieve and as a video tells a thousand words, I’ll leave you in the hands of Shirley Barre (stick to the end for the real highlight!). Into an all GB final, a phenomenal achievement from both U16s sides.

Back in time for Tea and Medals
On the first day of a cricket test match, if you win the toss and choose to bat, the philosophy is that you work hard in the morning and afternoon, keep wickets intact and score your winning runs in the evening. For the so far undefeated GB sides, there were three finals to be played, a guaranteed gold in the all GB U16s final, but the O55s faced Hungary and the O45s faced Germany. We’ll start with the tremendous all GB final in the U16s, an event we have dominated through the years. After their heroics in their previous match, could the 2s shock the 1s in the final? Alas no, they could not and GB U16 1s claimed gold, for David and Luke adding the European title to their World Title from 2016. For Ross and Will, it was a tremendous silver in their debut international team event. Next up were the O55s, who had started their day with a cracking victory over the World Champions, Germany. In most sports, in most events, defeating the World Champions in the morning would make you a shoe in for the gold medal. However, in the final they faced Hungary, led by the exceptional Peter Sakovics, and most certainly not a walkover of a side. However, having done their hard work in the morning the O55s were not going to let it slip, Rakesh Gupta working hard in the first two sports to keep Sakovics in check, meant that the doubles pairing (Steve Kneller & Bruce Shepherd) and the second singles player, Martyn Langston could do the damage and apply the scoreboard pressure. It worked a treat and the O55s came home with the second GB gold medal of the day. The final final of the day for GB was also the hardest, as our O45s team concluded their five team box league with a winner takes all match against the reigning World Champions Germany. The World Champions raced out into an early lead and despite the brave efforts of the O45s, channelling their inner U16 2nd team, they just couldn’t claw it back and would once again have to settle for a silver medal. Epilogue
You may have noticed that there was a complete disappearance of the U21s from the evening session report. Well, for reasons known only to the tournament, the last match in the U21s, the effective final between Austria 1 and GB U21 was scheduled for the Saturday evening. So, after the excitement of Friday, we returned for the final team match of weekend 1 of the European Championships, as Hannah Boden, Piers Boden and Leon Griffiths faced the best that Austria had to offer. They may have had to wait over 24 hours between matches in the team event, but Hannah, Piers and Leon were not to be fazed. You can read what happened below, or take in the videos provided by Jo Bennett for us through Facebook Live here:

They edged the TT, wins for Leon and Piers, to lead 27-23 into their specialist sport as a team, badminton. It was something of a surprise when Leon lost his badminton, 9-11, but there were no such qualms for Hannah (11-3) and Piers (11-4) doing the damage, GB 17 up before the squash. Leon and Hannah cancelled each other out on the squash court, Leon winning to 8 before Hannah lost to 8, Piers coming through with an 11-5 victory to put the GB team 23 ahead, needing just 11 at the tennis across the three rubbers to claim victory. Austria, the World and defending European Champions were on the ropes, they needed a miracle, it was not forthcoming. Leon won the opening tennis set, 11-5 and that was that, a third Gold medal out of four events for TeamGB, in addition to two Silver medals. A wonderful return from the first phase of the European Team Championships. 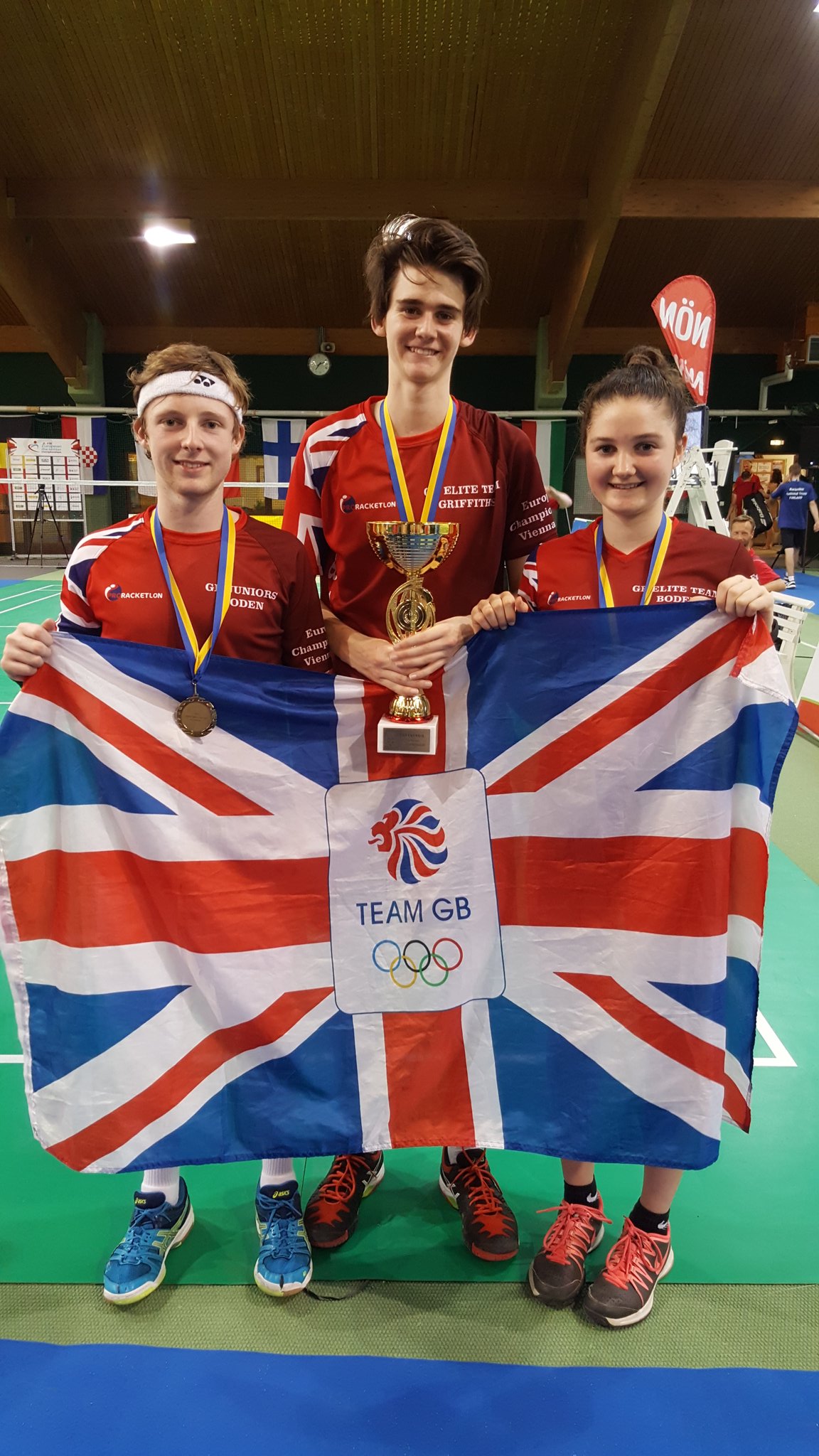 TeamGB 1-4 compete in the open divisions next Thursday, and UK Racketlon will bring you all the scores as they occur. For now our Juniors and Seniors continue their singles and doubles quests, a full round up of any further medals will come later in the Bank Holiday weekend.