Clean Sweep for Boden’s Back Seat and Stahl Wins Again.

Clean Sweep for Boden’s Back Seat and Stahl Wins Again.

Malcolm Boden delivered a car full of winners, as the three back seat passengers, Hannah Boden (Ladies A), Piers Boden (Men’s B) and Greg Dawson (Men’s C) made it a highly successful journey for the Yorkshire vehicle.  Duncan Stahl made it two ERA titles in 2 weeks following on from his victory in Oxford to win the Men’s A, Steve Kneller prevailed in the Men’s O45s and William Gregson took the U13s title. 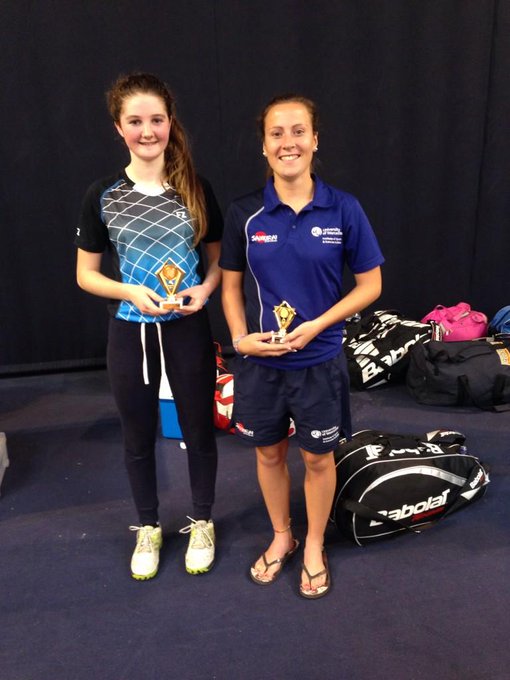 While it is usual to start these reports with the A draw, this one time we’ll start with the U13s, which provided one of the tightest results ever in an ERA event with 3 players, Leon Kashden-Brown, Rafal Wilowski and William Gregson, all finishing level with 2 wins and a defeat each.  Following count back, William Gregson was declared the winner, based on the differentials in the matches involving the three.  However, testament to how tight this was, between these three the biggest win was by 8 points and the smallest 2 points, as three players pushed each other to the max in the competition.

Now to the Men’s A, the 8 man draw featuring some interesting ties, noticeably Alex Du Noyer bring his badminton prowess to the table tennis table in an attempt to find a way round/over/through Will Coley’s quick hands defence! Duncan saw off Stephen Davey, Keith “back in the A” defeating James Watkins (James unable to channel the anger from being mistaken by Keith midweek as James Pope, no greater an insult can be offered!) whilst Josh Kashden saw off Mark Green.  That meant that Duncan would face up to Alex in the first semi-final, with Keith taking on Josh in the second.  Duncan eased past Du Noyer, having too much for him on the table tennis table and squash court, whilst Josh was able to command the tennis court ensuring Keith couldn’t reach the finish line, as the youngster won by 4 points.  Alex defeated Keith to take 3rd whilst Duncan defeated Josh.  Duncan edged the table tennis to 18, before Josh won a hard fought badminton match to 19, leaving Duncan in the knowledge that whatever the youngster scored at squash he would need at the tennis to take the title.  After defeating Josh to 6 on the squash court, he was able to secure the 6 tennis points he required without any dramas.

The Ladies A provided another rare event for a Racketlon tournament, with debutant Lauren Whiteman requiring a gumi-arm to beat Jo Shelley, in a match that swung this way and that, Jo requiring 5 points to win the tie on the tennis, faced the impressive skills of tennis coach Lauren, who held out to force the gumi and then after being invited to serve, held her serve to take the match in the best (worst) way to win (lose) a Racketlon tie.  Hannah Boden had no such tremors as she saw of Kate Hughes, nor Liz Clark over Dominque Ford or Dianne Baker over Alexandra Wiloska.  Hannah polished off Liz in the first semi finals and Lauren defeating Dianne to make a final on her debut.  In the final, Hannah edged a nervy table tennis duel 25-23, before winning the badminton (21-7) and the squash 21-3 to avoid the danger of Lauren on the tennis court.  A fantastic result for the debutant Lauren who we hope to see again, whilst young Hannah Boden, really showing her potential with her biggest UK tour win to date.  A number of other young women are now joining the more established UK Ladies guard showing that UK Racketlon is growing well.

The Men’s B featured two box leagues with Piers Boden emerging from Box A and Dylan Leigh from Box B to contest the final.  Piers proving too strong for Dylan in the first 3 sports to take the B title.  Christopher Kendall took 3rd place defeating Jonathan Spinks in the 3rd/4th place play off.  Greg Dawson, a top U15s badminton player from Yorkshire make his Racketlon debut and won the Men’s C defeating Ian Wade in the final, with George Roberts taking 3rd.  Last but not least the Men’s Over 45s, where Steve Kneller the number 1 seed defeated Graham Norton the number 2 seed in the final, of which the highlight was a titanic duel on the badminton court, Steve winning 24-22.  Julian Kashdan-Brown finishing 3rd.  However the tightest match was reserved for the 5th/6th place playoff, as Geoff Woods and Marek Wilowski reaching 20 all in the tennis, with scores level, Geoff edged the tennis 22-20 to take the overall victory in that match.

All in all a fantastic tournament, our second visit in 2014 to David Lloyd Dudley and we are as ever very grateful for their hospitality and excellent facilities, many thanks to Rob Comber for all his help in organising the venue for the event.  The ERA is also grateful to Dominque Ford and daughter Helen for their hard work running the tournament desk and as ever to all the players who turned up and played an excellent tournament in the right spirits.  Letchworth is the next event on November 2nd at another fantastic venue, before the Christmas Racketlon in December.  We look forward to seeing you all soon.

P.S. Some people opted for the more glamorous (sorry Dudley) location of Helsinki and the Finnish Open.  Dave Ridout and Richard Middleton took the Men’s B doubles title, whilst Richard also finished 2nd in the Men’s B and the Men’s O45s and 3rd in the Mixed Doubles A (clearly a man who knows how to have a relaxing weekend away!).  Maureen Thompson and took 3rd in the Women’s Doubles to make it a successful weekend in Scandinavia for the Brits.