10 events counted towards the 2014 UK Racketlon Tour Race and it was Alex Du Noyer who claimed the Men’s crown rewarded for a season of consistent strong finishes in the Men’s A and a keenness to play in all 10 tournaments! Alex was chased in the race by Luke Barnes and Ed Harvey.  Duncan Stahl was the most successful player of the season, with 4 titles (Surrey, Richard Lawrence, Midlands & Herts Opens).  Katie Barclay was the Ladies race champion, squeaking in ahead of Hannah Boden and Dianne Baker.  Hannah though had an impressive season, winning her first 2 titles along with 3 podiums places whilst the evergreen Barbara Capper took two titles including the British Championships. 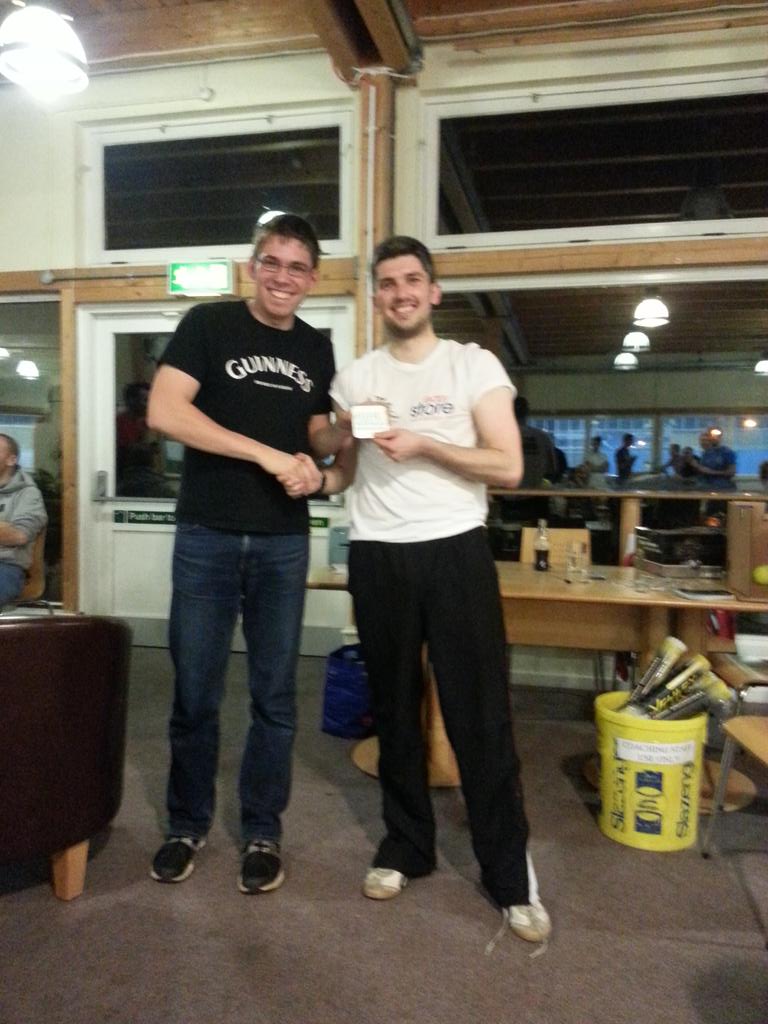 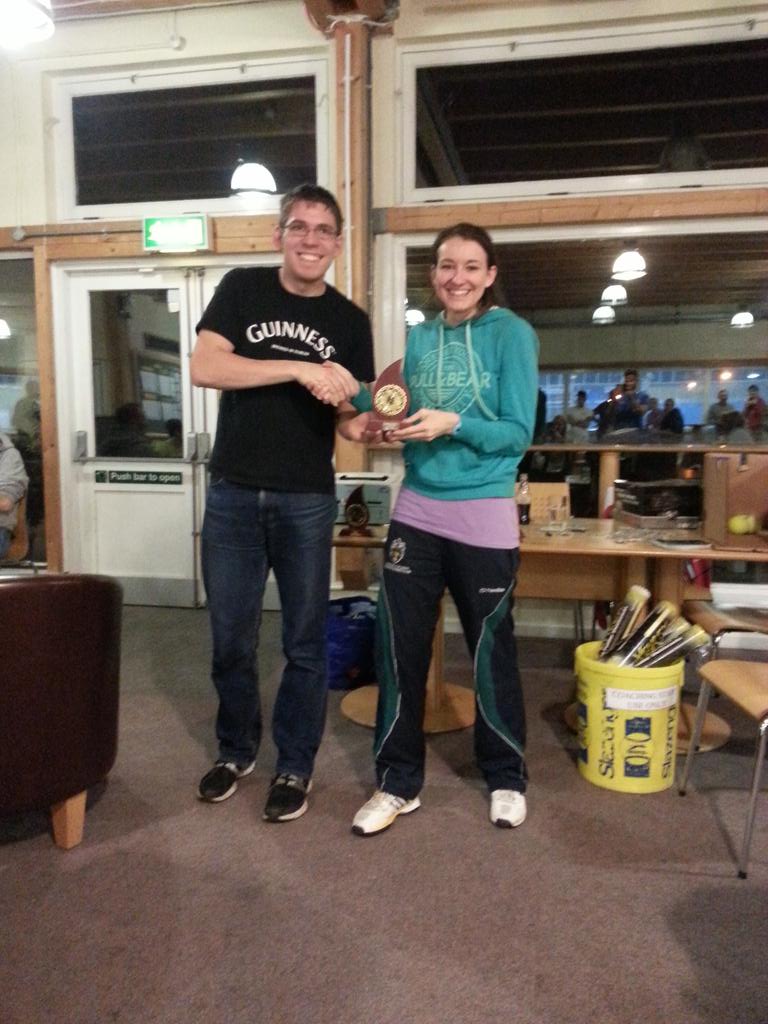 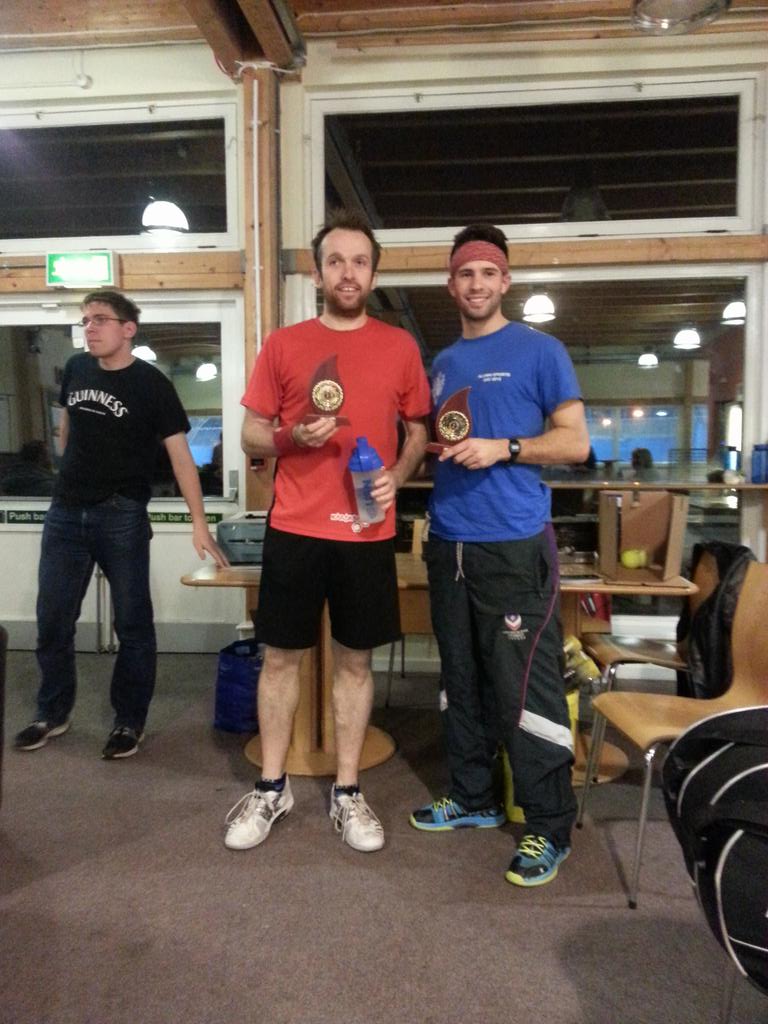 Alex Du Noyer (white t-shirt), Katie Barclay and Duncan Stahl (red t-shirt) & Luke Barnes (dodgy bandana) at the 2014 Herts Open. Apologies for the over use of my image....
(Pictures by Rachel Lawrence)

The tour started in Bedford, with wins for Jeremy Krzystyniak and Dianne Baker, the respective podiums made up of Fiona Sime and Stacy Knoop in the women’s and Mark Green and Luke Barnes in the mens.  Next it was to Cardiff, for the Welsh Open, were Calum Reid earned his only UK tour title of the season, ahead of Matej Dohnal and Luke Barnes, whilst Orsolya Szegner took the ladies title from Hannah Boden and Clair Miles-Owen.  The Welsh Open also saw the emergence of the star of the 2014 tour.  With the exception of Hertfordshire, there was no distance to great for Dylan Leigh to consider missing a tournament.  Landing at 4am in Cardiff? No problem I can get to Manchester for an 11am start, Dylan Leigh was seemingly ever present.  Next it was to God’s own county, Yorkshire (they say, but lets be honest it’s really Lancashire, otherwise Richard III wouldn’t have been found in a car park in Leicester).  It was a wonderful day for home talent, as Luke Barnes (Harrogate) and Hannah Boden (Huddersfield) took the titles.  Matej Dohnal and Phil Todd filling out the men’s podium and Angela Crossley and Jo Shelley the ladies.  From Yorkshire, it was time for the test event for the upcoming World Championships, the British Open at the Surrey Sports Park.  Ray Jordan took his first British Championships title, inflicting the only final defeat on Duncan Stahl in 2014.  Josh Kashdan rounded out the podium.  Barbara Capper denied Hannah Boden consecutive victories in the ladies competition, taking the first of her two titles in 2014.  Jo Shelley took third place.

It was back up North for the next instalment of the tour and the North of England Open at the Northern Club in Manchester.  A wonderful venue, with George Stafford a highly skilled squash player defeating Keith Lesser in the final with Yorkshire Open champion Luke Barnes in third.  In the ladies draw it was business as per British Open, with Barbara Capper defeating Hannah Boden with Jo Shelley in third.  With that the North was left for 2014, but it is very positive to have more tournaments and events in this region and hopefully this will continue to develop.  Next up was the Surrey Open, Duncan Stahl opened his titles account defeating Richard Middleton with Ed Harvey in third.  The ladies event was won by Jacqui Lipinski from Sue Gotham and Jo Brooker.  After the World Championships interlude, we were back for the last run of events for the season, Limpsfield, Richard Lawrence Open, Midlands and Herts.  Luke Barnes took his second title of the season in Limpsfield, Ray Jordan in second with the talented youngster Leon Griffiths in 3rd.  Katie Barclay took the ladies title from Kathryn Milne and Chrissie Mariner.  Next it was to Oxford, to the Richard Lawrence Open, an event organised in his memory.  Duncan Stahl took the title, defeating Ray Jordan again with Josh Kashdan in third.  Katie Barclay took the ladies title with Ingrida Kerusauskaite and Ruby Marsden filling out the podium.  But the real winner was Lifeblood, for whom the event raised nearly £500.  It was back to Dudley for the Midlands Open.  Duncan once again reigned supreme, Josh Kashdan this time his final victim, with Alex Du Noyer picking up his first podium place of the season in third place.  Hannah Boden took her second and final ladies title of the season, defeating excellent newcomer Lauren Whiteman in the final, Dianne Baker taking third place.

So, in the blink of an eye, we had reached the final event of the season, the Herts Open.  Duncan made it three in a row to end his season on a high, with Luke Barnes the defeated finalist and Keith Lesser in third.  Rosemary Davies took the ladies title, with Katie Barclay in second and Fiona Sime in third.  A frenetic season, the World Championships, a UK tour that reached over     230 unique players, new events and successful returns to popular venues, 2014 has been brilliant and 2015 promises to be another exceptional year for Racketlon in the UK, we look forward to you joining us on the journey.